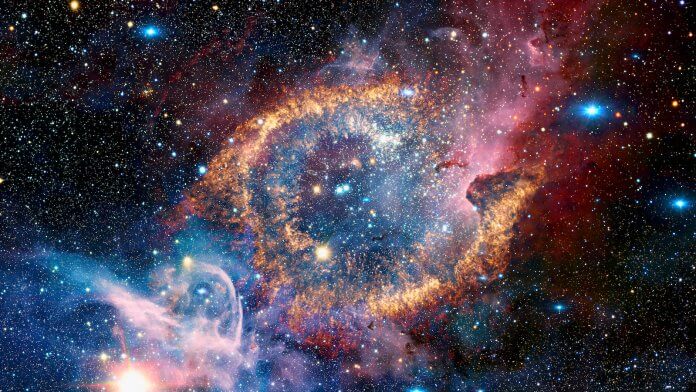 When we look up into the night sky, we don’t really give it the attention it deserves. We don’t fully grasp the deepness and vastness of space itself.

Here are 5 mind-boggling facts about the universe:

1. Most of the Universe is made up by Black Matter & Dark Energy

Let’s start with this, our universe isn’t made by what we once thought it was, for years it was believed that what we can see in space, is pretty much the entire universe, galaxy, stars, planets, etc.

But as time has gone on and astronomical instruments have improved, it’s far from the reality we once thought it was.

What we used to see in the universe is the Baryonic Matter, that’s the stuff that we are all made of, stars, planets, worlds, even your cat.

We recently found out not many years ago that the Baryonic Matters is only 4.6% of the entire universe, 23% is dark matter and mind-boggling 72% is Dark Energy in the universe. Here’s a photo to illustrate.

So the universe isn’t made by galaxy and stars as we once believed but instead, it is most of it a black void that defines science and space, it’s pitch black with nothing there.

2. The Universe is Astronomically Huge.

For years we’ve tried to find out how big the universes actually really is but it appears to have no end destination.

The observable universe consists of galaxies and other matter that we can observe from earth the present day because light from those objects such as stars and nebulas have had time to reach the earth.

3. Energy From the Sun

More Energy from the Sun hit the earth every hour than we use in 1 year. The sun is more than 100 times bigger than the earth, and it works in harmony with our planets. Without it we wouldn’t exist.

The amount of energy our sun emits is an enormous amount, and if we could collect all of it we could power our planet for 500.000 years. But most of this energy is going to waste, going into our solar system without ever colliding with anything.

Another fact about that sun is that eventually, it will consume the earth. When all the hydrogen will be burned out, the sun will continue for about 130 million years burning helium.

During this time of helium burning it starts to expand to the point that will engulf Mercury, Venus and the Earth. This will happen in millions of years.

4. Planets made of diamonds

There might actually be planets made out of diamonds, diamonds are the hardest natural material on earth, a diamond is simply crystal or pure concentrated carbon that form under crushing pressure and intense heat.

A few years ago scientists discovered a star called “ 55 Cancri E” located 46 light-years away from our planet, had a carbon to oxygen ratio greater than 1.

The planet itself is not made from diamonds, but the chances are that the planet core is far from a myth that it cannot be made of diamonds, carbon reach plants could have 1/3 mass in carbon alone, meaning the majority of their core would be a solid diamond.

Black holes are very real and very confusing, most famously black holes were predicted by Einstein’s theory of general relativity.

This shows that when a massive star dies in a supernova it leaves behind a small, dense revenant core.

If the total mass of the star is large enough, then it can theoretically be proven that no force can keep this star from collapsing under the influence of gravity.

So we know how black holes are formed, and to the best of our knowledge understand what they are. But we have all asked our self what would happen if a Human would fall into a black hole?

From years of Analisis scientist have been able to detail what would happen if a human would fall into a black hole. And it would be something like this:

Imagine you are standing near a black hole, as you look towards it you see a circle of perfect darkness, but around the black hole, you see the familiar stars of the night sky.

Due to the gravitational pole of the hole, their patter is strangely distorted as the light from the distant stars gets bent by the black hole’s gravity.

As you get pulled toward It you move faster and faster, you will feel a strong gravitational pull, as a result, your body is stretched apart.

But if you were however somehow able to remain intact, what would you see? That’s the unanswered question, and where would you go? Would it be another point in space? Or perhaps another dimension?