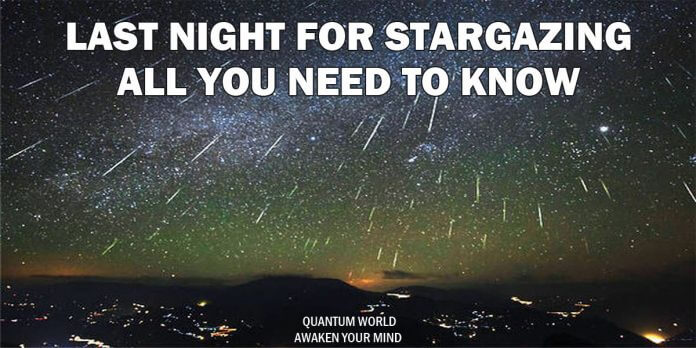 Considered one of the most beautiful meteor shower of the year active between mid July and 23 August. The Perseids are back to give us an amazing view again. The word ‘perseid’ derives from a mythological Greek term Perseidai meaning the sons of Perseus.

There is a constellation named after the hero of Greek mythology, the constellation Perseus from which these meteorites appear to hail and took the name.

We know that meteors comes from leftover comet particles and bits from broken asteroids and when these comets passes by the Sun they live a dusty trail behind them.

Every year when Earth passes through these trails the bits and particles collide with our atmosphere and disintegrate. Because of the collision we can see the glowing and colorful streaks on the sky.

The name of the comet which left the dusty trail that hits our atmosphere and creates the Perseid meteor shower is 109P/Swift-Tuttle. It takes this comet 133 years to orbit once the Sun, and the last time it visited the inner solar system was in 1992.

One fun fact is that 109P/Swift-Tuttle was discovered independently by Lewis Swift in 16 July 1862 and by Horace Parnell Tuttle in 19 July 1862. And the one that actually realized that this comet is the source of the Perseids was Giovanni Schiaparelli in 1865.

The long awaiting meteor shower are primarily visible in the Northern Hemisphere because of its radiant in the constellation of Perseus, but they can be seen also all across the sky. During the peak, the rate of meteors reaches 70 or more per hour and it occurs in warm summer night-time weather, making it easily to view.

The best time this week we can still see the Perseid is on early-morning hours on 12 August.

After the moon rises and shines, at about midnight, the light will affect the the peak viewing. Don’t worry, you will have one meteor every 2 minutes, and they are best seen between 2 a.m. and dawn.

And if you ran late or didn’t woke up, you can still see a few of the Perseids after 9 p.m. but not as many as you would had on early-morning hours. You don’t need an astronomical instrument to see the Perseids , only a clear sky.

Let your eyes 30 minutes to adjust to the dark, you will see more meteorites that way.

Also try not to look at your phone or other devices with bright screens because it will negatively affect your night vision, and reduce the number of meteors you’ll see.

If you photograph the meteorites post them online with: #quantumworldawakenyourmind