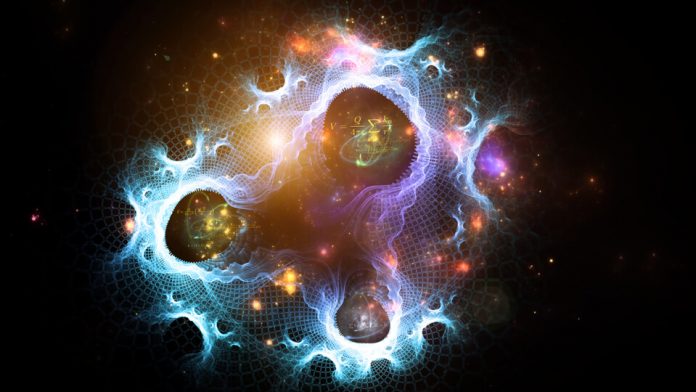 Let’s take a journey through the world of Quantum physics.

What is Quantum Physics?

There is something happening within the scientific community. Something big which, if proven correct, would lead to the complete breakdown of known physics. When you look at the big, the macro, it acts one way. When you look at the very small, the micro, things begin to behave in a completely different format. A different pattern. Quantum Physics hopes to understand the new pattern.

Particle Wave Duality: States that, all particles, exist as a wave of probability. Until the time, a conscious observer, collapses into being an expected particle.This concept is likely to go against the grain, it may not even seem natural to you, but it has been under debate in the scientic community since Einstein himself.

Particle Wave Duality says, atoms have no set placement/form, they exist everywhere at all points in time. When a conscious being expects a particle to be somewhere, the likelihood of the atom existing where Consciousness dictates, increases. Thus creating a reality where the particle exists exactly as consciousness expects it.

Simultaneously, there would be countless other realities in which, consciousness dictates the particle elsewhere. Or, realities where, there is no dictation of the wave.

This video breaks it down for you. While there is no observer, the wave, exists as merely probability. When the observer comes into play, the wave ceases, and the particle “chooses” a place to exist in.

What if the Macro, behaved as the Micro?

See your computer. Then imagine you live in a different universe. Where things don’t always sit still. Suddenly, your computer disappears from your lap, and onto the table. Then into the kitchen. Now pretend like you can see a faint trace of everywhere and anywhere your computer may exist.

That is the proposed view of reality. The computer exists at All points, but, it gets told by probability where it is most expected to be.

Where does that lead us?

Using your minds eye, Imagine a world, where everything was merely probability. Atoms, don’t exist at any set point, they exist as a possibility. When you wake up in the morning, and go to work, there is a slight chance your car won’t be where you parked it. While driving down the road, the cars, could magically appear directly in front of you. Finally. You get to work. And your desk is Way too small to sit in. Nothing has a set position or size. It merely is as it feels like.

With enough dedication you, being the conscious observer, could arrange life around you as perfectly as you’d like. But the other universes, where different things happened, still exist.

Just maybe, we could exist in a world of probability. If we do, well, that opens up a lot of doors. What if we could, shift, reality? Take the reality we would like to experience, and merely raise its probability of existence, thus replacing the world you are currently experiencing with the one you would like to experience. According to quantum physics this is a very plausable event. With the proper training of course. If Quantum Physics is right, we would exist in a universe, surrounded by countless other universes. All of which we could potentially reach. All of which relate to the one we live in directly. Without actually seeming to interact with them.

What if we could “dream” ourselves, into a reality where particles align just so, creating a universe where Harry Potter was born? Or a universe where we could live to be 300? Maybe even one, where at this very moment, You are flying on the back of a dragon.

Quantum Physics hurts the brain of even the smartest people however, it gives us a couple things. The ability to teleport, time and space, for one. A reality, where all possible realities exist, even if they can’t tell each other apart. Finally, we are lead to one other conclusion, one that can change your life. We are eternal. If our body dies in this universe there are countless other potential realities. Some where you are you. Others where you are him.

Even a few realities… Where You are Everyone.