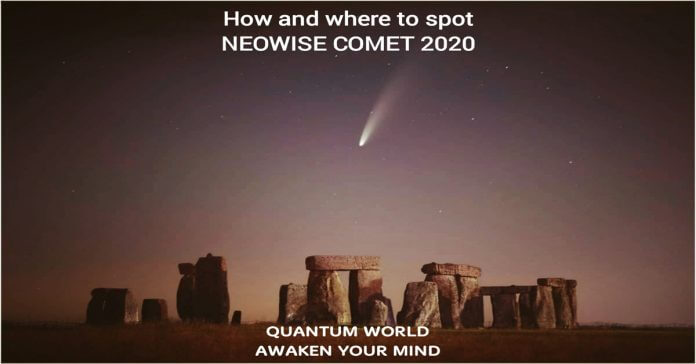 What, when, where and how to spot it.

The experience of watching a comet can be a very unic moment. The serene night sky can reward those who follow its spectacular journey from far away, a journey that could last weeks or months for some comets to continue their path.

Comet NEOWISE or C/2020 F3 (NEOWISE- Near-Earth-Objective-Wide-Infrared-Survey-Explorer, the name of the space telescope used to discover this particular comet) it’s a retrograde–comet with an observation-arc of 70 days, discovered in March 27, 2020 and what makes it more special is that the comet, this ice ball named NEOWISE, can be seen in another 7000 years.

At the time, the astronomers discovered the comet was 250 million km away from Earth and 300 million away from the Sun, started being visible to the naked eye since July for almost the hole month.

Even from the beginning, to be specific from June, this comet amazed the astronomers with it long tail and condensed core. Joseph Masiero from Jet Propulsion Laboratory al NASA said that based on its infrared signature, it is 5 km long and its nucleus is covered with dark particles left behind from its birth close to the beginning of our Solar Sistem since 4,6 billions years.

Moving fast, in July 3rd it made its closest approach to the Sun, about 43 million km away.

Also a delicate time for our ability to see it, as the comet’s visibility from the Earth is influenced by the Sun’s vast energy and heats the comet making it brighter and possibly breaking it into pieces.

Why was it delicate? An example could be that earlier this year icy comet named ATLAS broke into pieces as it passed near the Sun due to the increased amount of heat.

By July 23rd its closest approach to Earth is at a distance of 103 million km that’s when we can see it in its full splendor, for the last time, if nothing interferes with its visibility.

In order to see it with the naked eye, look to the Northwest after sunset, under ARCTURUS, the brightest star in the sky right now. Scientists recommend to use binoculars for a marvelous and better view.