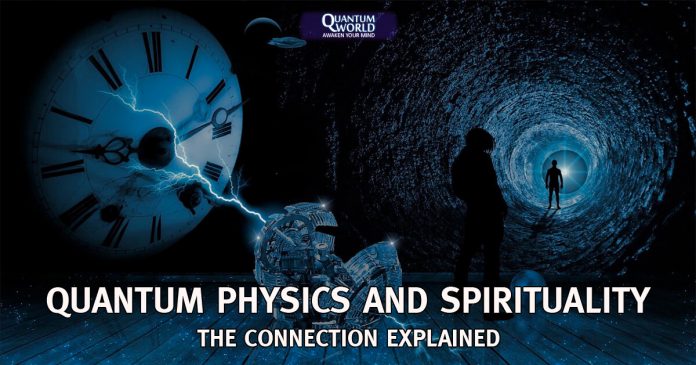 What is quantum physics?
A quantum is the minimum unit of any physical entity involved in an interaction.
Quantum theory is a branch of physics which is the fundamental theory of nature at small scales and low energies of atoms and subatomic particles.
Quantum mechanics differs from classical physics in that energy, momentum and other quantities are often restricted to discrete values (quantization).
Quantum physics or quantum mechanics provides a mathematical description of the wave/particle duality and interactions of energy and matter

What is The connection between quantum physics and consciousness?
Consciousness, or observation, can affect the physical world around us is called the “Copenhagen Interpretation”.  According to the Copenhagen interpretation, as long as there is no consciousness observing a system (a system of particles, planets, light, chairs, etc.), then the system will evolve in time according to the rules of quantum mechanics (waves and super-positions and whatnot).  However, the moment that a conscious observer observes the system it suddenly stops obeying the laws of QM and, rather than being in a superposition of states, snaps to one state.  Essentially, the act of observation creates a definite reality.
Among quantum physicists, the best theory is the “Many Worlds Hypothesis”.  Here’s the basic idea:
Light was the first thing that clearly demonstrated super-position (being in more than one state at once).  After that we saw super-position in electrons, protons and neutrons, alpha particles (helium), and even Buckyballs (also called “Buckminsterfullerene”, a molecule with 60 carbon atoms).  The larger a thing is, the harder it is to do an experiment that shows super-position, but so far everything seems to be capable of being in a super-position of states.
So, extend this from “everything we’ve ever been able to measure can be in a super-position of states” to “everything can be in a super-position of states”.  Where “everything” includes people.  Now the QM laws apply at all times, without awkward questions, exceptions, and explanations.  And, even better, the relationship between quantum physics and consciousness is revealed to be: nothing.

Are quantum physics and spirituality related?
Spirituality is a human construct; quantum mechanics is a science. Quantum theorists aren’t just shooting in the dark, or making up fanciful things — there are experimentalists out there who’re working on these theories, verifying them experimentally and bringing them to fruition.
There are several interpretations of quantum mechanics, however, and that’s arguably more philosophy than science. The scientific community hasn’t zeroed in on one interpretation, but the theories and axioms that make up QM have been experimentally demonstrated to be correct.
Quantum mechanics says nothing about life/death, God, or anything else that isn’t even remotely related to the domain of science. Some physicists do talk about consciousness (this is very rare because it’s entirely possible to ignore consciousness completely and still do quantum mechanics; most of their efforts go into either figuring out ways of using quantum mechanical resources to do nifty things, or building theories upon the existing framework to learn more about the universe) and I suggest you exercise caution while reading about these things because it can be hard to tell the difference between interesting questions and quackery.

Is it correct to use quantum theory to explain spirituality?
Quantum Mechanics is a mathematical model that is used to describe the Universe (or at least certain aspects of it) and which can make testable, falsifiable predictions with hard numbers. Spirituality (at least to the extent I understand it) is mathematically ill-defined and thus has nothing to do with Quantum Mechanics.

In fact, forget mathematically-the entire domain in ill defined to its core and thus has an orthogonal relationship with science.
Science is only concerned with making models that are consistent with experimental observations and which can make predictions that can be validated or negated via experiment. Spirituality does no such thing.

Quantum physics is our best explanation to date of the fundamental nature of the material world but not the spiritual world. I believe, like many, that our world has both a material and a spiritual aspect. So, any complete understanding of our world must take into account both quantum physics and spirituality.

Physicists who study quantum physics do not generally also study spirituality. So, most physicists have little educated understanding of it. Yet, there are a few physicists who, in their ignorance of spirituality, make disdainful statements such as: Spiritual people think that since there is a mysterious aspect to quantum theory and also to consciousness, the two must be related.

Quantum physics tells us that the fundamental particles that underlie both matter and physical forces such as electromagnetism can be completely described by mathematical equations. A growing number of physicists believe that not only does mathematics describe our universe; our universe IS, at bottom, mathematical constructs—a bunch of equations playing out over time.

This theory states a huge truth but also has a huge hole in it. What are the steps that take us from a set of mathematical concepts to our experience of three-dimensional space, the smell of a rose, the colors of a sunset, and ….? This is Stephen Hawking’s question.

Consciousness turns these equations into subjective experience. We are living in the Matrix (the movie in which human beings lived in a virtual reality which they experienced due to their brains being hooked up to computer coding). But this is only an analogy because in “The Matrix,” a physical computer generates the virtual reality.

Consciousness does this for us. It gives us our subjective experience of electromagnetic signals.I am describing a basic theory of Buddhism and other spiritual traditions, the philosophical theory of “Idealism”: We live in a dream created by the consciousness of our individual minds or possibly by only one mind that we’re all hooked into. This dream appears very consistent because, unlike our fantastical dreams at night, it follows mathematical equations.

And it appears very objective because we’re somehow or another all hooked into it.