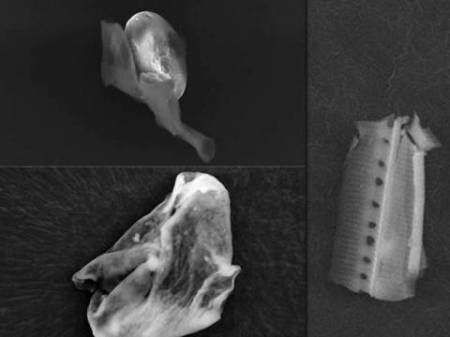 The above images are of a body that was found in the stratosphere, recorded with an electron microscope. The body was found by a scientific balloon at an altitude of 27 kilometers from the Earth’s surface and this, according to the scientists, proves that it cannot have originated from our planet. These microbes have probably come from somewhere else.

The Sheffield scientists say such relatively large and dense particles could not have remained at those heights for more than six hours, making it even less likely they were lofted into the stratosphere by some earthly force.

Furthermore, the scientists say the particle is remarkably free of soil or any other solid material, suggesting it came from a watery environment, not volcanic debris.

“Most would suggest that these particles simply have drifted to the stratosphere from Earth. Yet, it is commonly accepted that an organism of this size is impossible to reach an altitude of 27 km. The only exception is a violent volcanic eruption, but nothing like that was recorded during the three years of our research,” said Milton Wainwright, Professor of Molecular Biology at the University.

The team of Professor Wainwright sent a research balloon in the Earth’s stratosphere during the most recent meteor showers.

“As there is no other mechanism that can carry such particles to the stratosphere, we can conclude that these entities came from the outer space. Our conclusion is that life continues arriving to Earth from space, that it is not limited to this planet and probably was not born here. If life is still coming from Space then we have to change our views about biology and evolution. The books should be rewritten!” added Professor Wainwright.

The balloon was equipped with special microscopes that were recording images between 22 km and 27 km from the Earth’s surface. When it landed, scientists discovered that it had recorded unusual entities in the stratosphere, which were too large to have traveled there from Earth.

As the scientists summarize in their paper, “We argue for its incidence from space, with a probable origin in the watery environment of a comet. We are content to claim that diatom fragment isolated during these studies has an extraterrestrial origin.”

The results and conclusions of the study were published in the Journal of Cosmology, and the original peer-reviewed journal article can be found here.