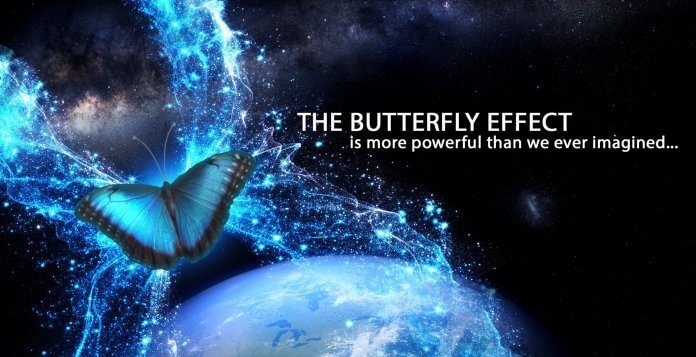 Almost 50 years back, an American mathematician and meteorologist named Edward Lorentz came up with a bizarre notion.

A butterfly flapping its wings in Brazil can produce a tornado in Texas, a.k.a the Butterfly Effect. The essence is that small causes can have significant effects.

This concept that was initially applied to weather has eventually found its place in economics, aerodynamics, chemistry, and many other fields.

In chaos theory, the butterfly effect is the sensitive dependence on initial conditions in which a small change in one place can result in an enormous difference following state.

The butterfly effect is a way of describing the cumulative effect over time of small actions in a large and complex system.

In 1952 Ray Bradbury wrong “The sound of thunder” in which a group of time travelers goes back to prehistoric times, they accidentally crush a butterfly and come back to find their time-line changed.

Since there are so many factors and even a tiny change can radically alter things over time, predictions become increasingly impossible as time goes on.

A great example of a real-life butterfly effect took place in the 20th century that affected nearly everyone on earth.

Unfortunately for him, and everyone in the world, he was rejected, not once, but twice.

That aspiring art student was named “Adolf Hitler,” who, after his rejection, was forced to live in the slums of the city, and his hate for anti-Semitism grew.

He joined the German army instead of fulfilling his dreams as an artist and went on to create the Nazi Party and incited World War Two, which killed millions of people worldwide.

And changed million maybe hundreds of millions of lives and destiny while also improving the face of the planet and geographic countries.

In your own life, the butterfly effect is coastally occurring though you are probably not aware of it. Whatever you do.

Whatever small decision you choose to take in the present moment, will have an impact, big or small, or maybe a considerable impact in your future life.

This does not mean that every small thing in your life will have a massive impact on everything, but some things in the present moment do have a significant effect on your future.

The butterfly effect is always present, and we cannot account for how any change, more significant or small, will affect our realities even days from now.

Keep in mind that small changes you make right now could and probably do affect, not just you, but everyone around you, whether it is in the present moment or the future. You are just a decision away to change your life forever.

Your small actions of today could even impact a large population of people in the future. We are all connected, and everything you do today will affect your future drastically.